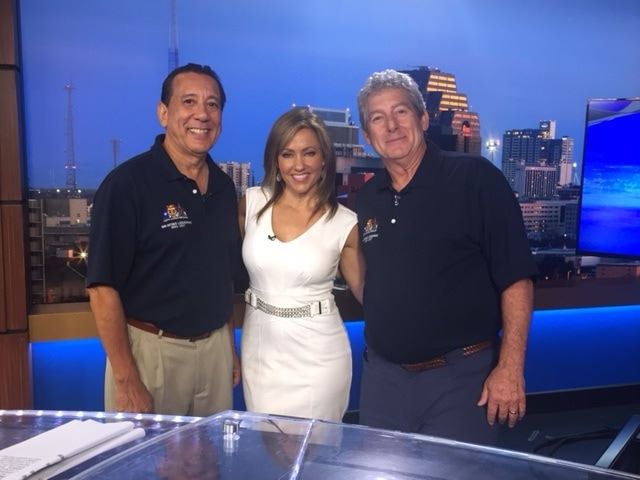 Ken Martinez and Fred Pfeiffer with local broacaster
News from Wilson County:
​https://www.wilsoncountynews.com/news/2017-06-07/South_Texas_Living/Music_faith_and_friendship.html
Here is a recent article in La Prensa:
https://laprensasa.com/culture/art-music/colorful-spot-middle-picture/
Here's is a link to On the Town. Page 28 & 29 speak of our upcoming 125th Anniversary Concert on June 25th, 2017.

Some of those institutions are no longer around, but the San Antonio Liederkranz—a men’s choir formed on July 11, 1892 by Father Henry Pfefferkorn as the choir of St. Joseph’s Catholic Church in downtown San Antonio—is alive and strong with more than 50 active singers.

The San Antonio Liederkranz will celebrate its anniversary with a free concert on June 25, 2017 at 3 p.m. at the Tobin Center for the Performing Arts, in the 1,700+ seat H-E-B Performance Hall.  True to its roots, the concert will feature German songs as well as a broad spectrum of pop, opera, highly-regarded Broadway show tunes and patriotic numbers. The choir will be joined by piano accompanist Rob Jenkins and the New Braunfels Village Brass Band.   Translations of all German or Latin songs will be provided.

This anniversary concert is free to the public with all reserved seating, but you must have tickets.  Tickets can be ordered now using the link on the Liederkranz website: www.saliederkranz.org (click on “HERE” on line three in blue, then on the BUY NOW button in the upper right hand corner under the TOBIN CENTER logo). Alternatively, visit The Tobin website; call the Tobin Box Office at 210-223-8624(M-Sat: 8am-8pm; Sun:8am-7pm), or visit the Tobin Ticket Window at the Center at 100 Auditorium Circle(M-Sat;10am-6pm; Sun 10am-2pm).

Doors at the Tobin open at 2 p.m., with food and drink for sale.  The concert begins at 3 p.m. and will last approximately 2 hours, with an intermission

James Martin will entertain the audience in the performance hall as they arrive for the concert, from 2:15 to 2:45 p.m.   Martin is a three-time award winning solo artist from San Antonio. Over the past nine years, he has performed his original Latin-Fusion style music throughout Texas and Mexico.  He has performed at Fiesta Noche del Rio, Bravo, Arneson River Theater, Historic Market Square, The Majestic Theater and House of Blues in Houston, TX.

The Liederkranz harmony is a four-part blend, in the German tradition. “The melody is usually in the top voices, unlike barbershop and other American arrangements, giving our pieces a distinctive tenor ‘shimmer,’” says Tom Ewing, PhD, Liederkranz choir director since 2000.   “We are also unique in terms of mixing sacred and popular music.”

“The San Antonio Liederkranz formula for its longevity is relatively straightforward. Relying on its well-documented focus of early German immigrant influences, San Antonio’s unique cultural and spiritual preservation, multiple language offerings and a broad spectrum of musical compositions and genre, the Liederkranz has ‘stuck to its knittings’ throughout,” says Mark Mueller, Liederkranz president.  “Musical quality remains an essential ingredient since our founding, leading to a loyal, devoted fan base across an increasingly diverse population. The final part of the formula is a strong, mutually supportive friendship among singers with bond which generally lasts a lifetime.   Our anniversary year theme is music, faith and friendship.”

Membership:  San Antonio Liederkranz Associate members who join or renew by June 20 will receive VIP seating at the 125th concert, as well as free tickets for the choir’s extremely popular Christmas concert.  This membership is only $40/year; applications can be submitted on the Liederkranz website at http://www.saliederkranz.org/.

History: Established in 1892 by the German Catholic immigrant congregation that built St. Joseph’s Catholic Church 20 years earlier, the San Antonio Liederkranz was formed to beautify the German-language liturgical services and sing at the German festivals of the parish and the community.  Over the years, the Liederkranz has built a statewide and international following—including the Bicentennial of the founding of San Antonio in 1931 and the Papal Mass in San Antonio in 1987.  The choir has toured Germany three times, performing twice at the residence of the President of the Federal Republic of Germany.

Present Day: Today, the Liederkranz is made up of more than fifty singers from many ethnic and religious backgrounds, with many descendants of the original founding families still singing.  The chorus presents annual Christmas and Spring concerts and participates regularly in the Sängerfests (“singing festivals”) of two German singing unions.  The Liederkranz is hired to sing at weddings and other private occasions.  The choir has continued to sing masses at St. Joseph’s since the 1890s, including Christmas Midnight Mass, Easter Mass, St. Joseph the Worker feast day and seven other Masses during the year. As referenced in a recent San Antonio Express-News article on local history, the Liederkranz is “as San Antonio as chili queens.”

Looking for a Few Good Men (singers!):  Men interested in singing with the Liederkranz are welcome to come to any rehearsal on Monday nights at St. Joseph’s Hall, 420 East Cesar Chavez Blvd., at 7:30 p.m.  Some musical background is helpful. Prospects are asked to attend one or two rehearsals to see if they are comfortable with the Liederkranz style. “We’re looking for a few good men,” Ewing adds. “Actually, we’d take a few pretty decent men.”